“Mom, I’m Gay” — A Mother and Son Explore the “Journey” Together | PFLAG
Skip to main content

“Mom, I’m Gay” — A Mother and Son Explore the “Journey” Together 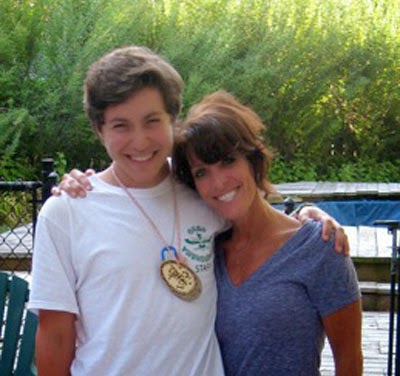 Debby
The physical pain was overwhelming.  My heart was racing and I felt short of breath. My mouth went dry. I remember wanting to grab my son tightly just to let him know that whatever he needed to say, it would be okay.  But his hands were over his eyes, his head down to shield his face and he was sobbing.  It was horribly sad to watch because he could not look at us. I was terribly afraid that I wasn’t going to say the right thing or act the way I was supposed to...but there’s no rule in the Parenting Book about what happens when you’re faced with a child who is telling you he is gay.
Jordy
These are the things I knew:
These are the things I didn’t know:
It is every closeted teen’s worst nightmare: Having your parents find out you’re gay was probably worse than anything else you could possibly think of.
Although I knew that I would be loved all the same, there was always the “what if” factor, and that is what scared me the most.
The hardest part was accepting myself, and by the time my parents found out, I was still not even close to doing so. It was so hard knowing that so many people in the country, or in the world for that matter, look down upon people like me.  All I wanted was to be treated normal.
To BE normal.

Debby
Immediately, I began searching for a therapist, drowning myself in some meaningful ‘gay mom’ literature and allowing myself to be sad. A little known but widely accepted fact among mothers of gay kids:
We grieve for the life we thought our children were going to have, and we are saddened by the obstacles we know they will face.
We can look ahead to what struggles await them and prematurely worry about how they will survive it all.  Will he know love?  Will he be depressed? My concerns were endless.
Jordy wanted to come out on his own terms, and I was experiencing some pretty intense emotional needs as well.  But respecting Jordy’s privacy was paramount; something I have learned about the gay community.  You do NOT out anyone … ever.  My husband and I met with an adolescent psychologist who was openly gay.  He was more than informative; he was influential, spiritual, loving, and warm.  He shared his life story, filled with truth, happiness and pain …  and so my journey began.
I discovered that by reaching out to every gay friend I ever had I would find some of the answers that would help me help Jordy.  I never looked back.
Jordy
It was at camp over the summer when I told one of my best friends about my sexuality.  Long story short — she was interested in being more than just “friends” with me.  Little did she know that I had no interest, but not because of her.  I just wasn’t into, well … girls.  So I told her.  And at that moment we both just started crying.  She was the first friend I ever told.
It was the moment that I had been waiting for my whole entire life. Saying the words, ‘I am gay,’ turned my world completely around.  In my mind, I thought, ‘If I can tell Maddy, then I can tell anyone.’
So, when I arrived home in August, I began to tell my friends.  At first it was so difficult, because telling people made it seem more real, and there was a period of time when I was still having trouble accepting myself — the most difficult challenge of them all.  My grades started to drop, because although I was making progress, and although my friends loved me unconditionally, I still had obstacles to overcome.  Hearing the words “fag and faggot” in the halls made me cringe.
Seeing political activists discriminating against the gay community made me feel subhuman. But I knew I had to trust myself.  I knew I had to pull through. I knew I had to pay it forward.
Debby
I sent emails, letters and facebook messages to all of my gay friends, asking them the same questions:  What did you need as a kid?  What can I do to help him feel beautiful, safe and loved?  How do I help him through this?
The answers made me sob.  In the car, on the computer, in the mail, they all wrote me back and told me their stories, some very sad and some truly inspiring.  I turned to Jordy’s teachers for support; they engulfed him with love.  He had the respect of all who knew and loved him. After Jordy told us we were free to share his news, we talked about it openly with our close friends and siblings.
We were never embarrassed, but our candor made others uncomfortable.  I didn’t care. This was my kid and my life.
Jordy
Time goes by.  I am so happy.  My friends and family were all so supportive of who I was, it was impossible for me to not feel totally accepted.  But I made myself believe that I was in a “perfect” world, when in reality it was far from that.  I still heard unwanted remarks; using the word “gay” as a derogatory term.
Discrimination against gays was always in the news, and teens were still ending their lives because being gay was considered ‘wrong’ —  I had to do something.
Every year my high school has an annual Variety Show, and I thought that it was the perfect opportunity for me to show people that being gay is okay.  I wanted people to see how much the world was changing, but also the fact that there is always room for improvement.  I created a video slideshow displaying photographs of openly gay celebrities, politicians, and athletes.  Inspirational quotes from such brilliant people like David Bowie and Harvey Milk.
And I ended the slideshow with words that truly shaped the human I am today.  These words were the ones that kept me going, and that made me think about how lucky I was to come from such an accepting community.  These words made me proud of who I was, and gave me the hope for a positive future:
It gets better.
Debby
Watching Jordy create “Secrets” was powerful.  As he researched and documented the public figures and quotes he wanted in the piece, he became more inspired.  Recognizing the catharsis behind this project, my family encouraged him to put himself out there for the ones who couldn’t.  Over 6,000 people saw this performance and it was quite a moment for Jordy.  I remember one performance where a community Rabbi stood up and began clapping vigorously before Jordy could even stop singing.  I could barely make it through – our journey was both ending and beginning all at the same time.  I have reached out to other parents going through what we did and I have continued to rely on my family and closest friends.  But what has happened to Jordy can happen to any child that feels love, warmth, support and unconditional acceptance — and this is what we need to preach to our schools, communities, churches, synagogues and politicians.
Only THEN, will it truly get better.
By
Blog
A Note to My Kid Coming Out Gay