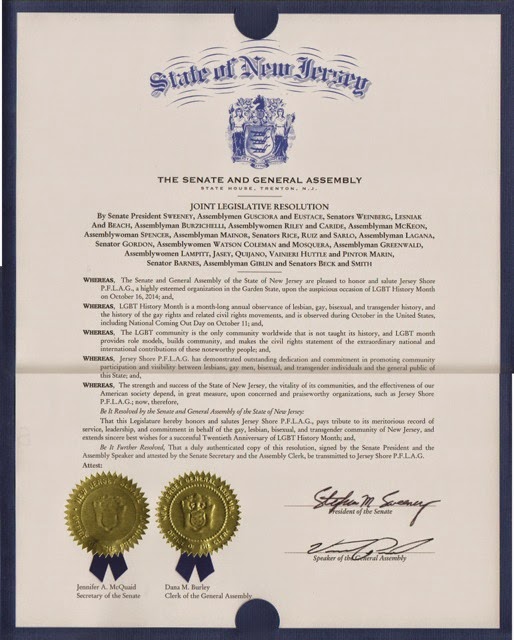 To officially celebrate and recognize New Jersey’s PFLAG chapters and the work they’ve been doing to move equality forward, , New Jersey Assemblymen Tim Eustace and Reed Gasciora reached out to members from all six chapters in the state. The assemblymen invited chapter members to the State House in Trenton for an official reception. Seth Raines of Jersey Shore PFLAG and Linda Murphy of PFLAG Collinswood were able to attend the special legislative session officially recognizing LGBT History Month, where they accepted a written commendation of PFLAG’s role in advancing the work and support of people who are LGBTQ.. Each chapter received an official copy of the commendation.
Then, New Jersey Congressman Frank Pallone held a conference call with LGBT leaders on Tuesday, October 21st, to celebrate the one-year anniversary of marriage equality in the Garden State. Abby Maisonave, North Atlantic Regional Director, and member of PFLAG Jersey Shore, participated in call.
Congratulations to all six New Jersey PFLAG chapters! We are so proud of the work you do on behalf of our LGBTQ loved ones, their families, and friends!
By
Blog
Focus on the Field Chapter