The 2014 Lunar New Year was last week, and PFLAGers on both coasts celebrated diversity of all kind by marching in parades with other API constituents. We have reports from both Califonia and New York on these special celebrations! 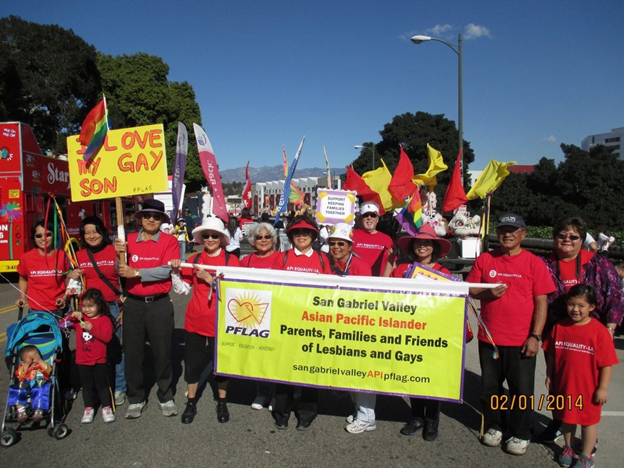 The mood was festive and crowd turnout this year was larger than the last. Some onlookers had colorful, shimmery confetti and noisemakers. We welcomed the “Year of the Horse” with the theme of “Family”. Aptly, our API PFLAG led the march, holding our bright yellow banner, all in red t-shirts, some parents brought their Pride signs. It would be the first time that a group would hold up Pride signs. These homemade signs stated proudly: “I love my gay son,” “Gay Son, Proud Mom,” “Proud Asian Dad of a Gay Kid,” “Support Keeping Families Together,” “Proud Filipino Mom”.

As we waved, bobbed our signs up and down, wide smiles underneath the beating midday sun, heads held up high, eye-to-eye contact with the crowds, a few of us could not hide the tears of joy and meaning upon the crowds cheering, applauding, and showering us with the shimmery confetti and noisemakers. One of the observations made was that there was so much enthusiastic support along the street and that perhaps this was credited to having our API PFLAG at the beginning of the group. The audience cheered those parents who were brave enough to support their LGBTQ children. The parent signs expressing their continued love for their children made the audience react so positively.  People were taking lots of photos of our signs supporting our children. This was not a Pride parade, but a quaint cultural parade where the narrow streets of Chinatown, L.A. were lined with tourists, local residents, weekend workers, many Asian and Pacific Islander families with their young children, local civic leaders, and immigrants.

The power of family love, support, and continuity of relationships and cultural values, are conveyed in our SGV API PFLAG chapter and its collaboration with API LGBTQ organizations, locally, statewide, nationally, and internationally.

Indeed, our API PFLAG chapter continues to expand its reach and visibility across the varied Asian and Asian-American groups, our shared values about family, respect for our elders, and resiliency as we adapt to our new nation and our children are born into, become a collective that we celebrate at our support group gathering.

Yes, the spirit of the horse, is in every immigrant and Asian and Pacific Islander’s ethos. We come to America with an indomitable spirit to improve our lives, to contribute and be grateful for the American dream, to ensure that our children is our legacy who will thrive, beyond just surviving.

We are PFLAG San Gabriel Valley Asian Pacific Islander. We are the voices and faces of API mothers, daughters, sons, fathers, friends, cousins, siblings, countrymen, driven to adapt and accommodate one another. We all speak the same language of love.

Next up we hear from Clara Yoon, founder of PFLAG NYC’s API Project:

The API Project of PFLAG NYC comes into 2014 celebrating its second year of raising awareness about lesbian, gay, bi, and trans issues in the Asian & Pacific Islander (API) community. Since the launch of API Project in 2012 to provide information and support to API families with a family member who is LGBTQ with a special focus on meeting the cultural and language needs of API families, we have built ties with LGBTQ organizations in the API community, like NQAPIA, SALGA, Q-Wave, Queer Koreans Alliance, and Dari Project. The involvement of parents has been warmly received, but there is still a long way to go to help families and allies to receive their LGBTQ loved ones with acceptance and pride.

The Lunar New Year is an important holiday for many from East Asia, and this year marked the fifth year that the API LGBTQ community took part in New York's biggest Lunar New Year Parade. API Project of PFLAG NYC marched for the second time with Lunar New Year for All, a coalition of many Asian & Pacific Islander LGBTQ groups, on Sunday, February 2, 2014. More than 60 people took part, including LGBTQ people, their families and allies, and helped make LGBTQ people visible in the broader API community. Clara Yoon, the founder of API Project and current board member of PFLAG NYC also invited Asian colleagues in her work place to join the parade and many showed up with their own families and friends, making the event even more special. The board president Suzanne Ramos who also marched with the group said, "The parade was a wonderful New York experience.  We were proud to be marching together with our API members and in support of all LGBTQ people in the API community and their families."

The API Project also joined Lunar New Year for All to march in the Flushing Lunar New Year Parade held in Queens on Saturday, February 8, 2014. This was the first time an LGBTQ contingent marched in Flushing.

Parents from the API Project were warmly received by many from Asian LGBTQ groups for whom the presence of parents was especially moving. We plan to continue participating in the Lunar New Year parades throughout the city in coming years.